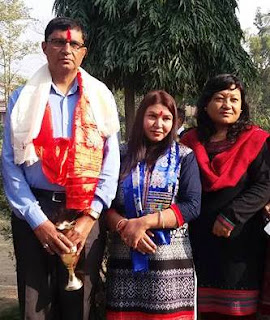 Thank you Rimala for your unprecedented respect and support which you gave me during my tenure of principal in SOS Hermann Gmeiner Higher Secondary School Itahari. You are one of the most loved people to reside in my heart.

Although we worked together for long, more than two decades, I couldn't know you better than in the days of my principalship. We had interactions, for every detail of financing in the activities of the school. We worried together to save funds, to purchase the supplies, to make the best use of resources, to facilitate the staff, to make annual budgets and what not.

There are many unforgettable moments which I shared with you. I still remember the day, your face beaming with happiness when I was selected as a school leader. You congratulated me the way nobody other did. Then our meetings and interactions increased. I learned so many things of the financial part of the institution which was unknown to me till then. Thank you very much for sharing information on such matters, which you did with great enthusiasm.

Read more »
Posted by Kumud Adhikari at 6:59 AM No comments:


He was a man of posture. With his bulging pot-belly with the vest drawn up to the chest and “Malkhan Sing” style mustache; he had started greeting me lately whenever I went to his fruit shop in the north eastern corner of downtown Itahari. I was buying fruits from his fruit shop from the time I came to Itahari, 19 years back. I rarely visited other fruit shops. A kind of affectionate and loving friendship had developed between us.

Thus, when I heard of his sudden demise from his neighbor fruit seller few weeks ago; I felt as if a lump of flesh has come up to my throat and is choking me heavily. I was finding it hard to regulate my breath. I never thought he would pass away so soon. That day I didn't dare to look at his shop, closed though it was. I just avoided look towards that direction and went home with gloomy face and weeping heart.

We casually talked about so many things that sometimes other buyers got irritated. He mostly claimed about the best quality of the fruits he sold and I believed as if whatever he was telling was not anything but the truth. And sometimes, his claims became totally untrue as the grapes or oranges I bought from him would be as sour as tamarind. Days later I would forget about the sour fruits and go to his shop again. We talked again; I bought fruits and parted with smiling faces. The cycle continued for 13 years. I brought fruits from his shop and he sold me. I didn’t know his name he didn’t know mine. Actually we didn’t need the names until one day:

He said he had bagful of grapes detached from the bunch. If I wanted to buy he was ready to sell me a kilo or so of grapes in half the actual price. I examined the grapes and they were in good condition. I nodded, he weighed and I was happy to have them.

Then a thought crossed my mind and I asked, “Can you inform me if you amassed such grapes? I would love to buy them.” He readily agreed and asked for my phone number. Then to save his phone number, for the first time in 13 years I asked his name, “Your good name please!”

Then I told mine. We exchanged the numbers, with renewed enthusiasm, and of course, with names.

He continued to call me for grapes since then. This happened for another three years. He still called me when I moved to SOS quarters after three years, and couldn’t manage to go to his shop regularly. He stopped calling but became little bit shy; and started greeting me ‘Namaste.’ But nonetheless, we were still friends and I didn’t stop buying from him.

Yesterday, I gathered courage to go to his shop. A young boy was there. I knew he was his son. I paid heartfelt condolence and said about the relation his father and I had. The boy was in tears. I tried to hide my tears and went away to my bike with a kilo of black grapes.

Posted by Kumud Adhikari at 8:01 AM No comments:

I don't know exactly where and how in the world the threads of relationship are spun. How Supreme Creator weaves the lives of people with love. Rahma, I have my eyes full with tears as I write the post and I can't forget the tears in your eyes when we said good bye to you in Fikkal. I hugged you then and said, 'don't cry my daughter, don't.' But you know I had a very difficult time hiding my own tears from you and others. You became a part of our family. You became our daughter; we became your baba and mamu; and all it began. When we left you in the bus I felt a lump of flesh from my heart has come to my throat and it was choking me.


Rahma, I remember very well the moment when I saw your photo with Neha shot in Aitabare. We were totally unknown to each other. Our homes were thousands of miles apart. We had different languages, different culture and different religion. But when I saw your photo for the first time, some corner of my heart said you are our daughter. Strange this feeling may be, but it is true, and when you came to Itahari, and when I saw you in person for the first time, I said,' you are my daughter.' I didn't think you as my daughter's friend. Rahma ! I don't know what made me say that. May be it was Allah's blessing, may be it was God's blessing. Since then, my mind and soul say we have three children: two daughters and a son. I believe relationships are not mere coincidences but they are something made in heaven and are beyond the understanding of a common human being.


We spent so good time together with you for eighteen days. We ate meals together. We roamed around together and enjoyed life as it came to us. We clicked so many photographs. We locked memories in cameras, phones and computers. Memories become alive as we everyday we look at them. Your mamu and I talk a lot about you. We talk about your courage, your interests and adventures you take. And we are very proud of you, my dear daughter ! And proud of your parents who gave you such good education, courage, love and ethics. We have seen that the threads of love are much stronger and they can bind people with immortal relations. I believe when relation of love prevails, the boundaries of language, nation and religion disappear.


Rahma, there is never a single day which passes without us not remembering you. Whenever we get time, we open the folders in laptop where we have saved our photos. We take time to rejoice every moment we spent with you. The memorable trip to Maghe, our home; you putting on Sari and clicking photos with Neha. Then our visit to Bhedetar; you and Neha getting your faces painted. The hot cup of milk- coffee at Charles Point.


These memories enliven us every day. That's exactly how we live.


Thank you Rahma, for coming to our life as our second daughter. Thank you very much. Love you !
Posted by Kumud Adhikari at 6:56 AM 1 comment: