I still remember the day when your voice reverberated in school complex through a huge sound system in the school's Annual Sports Day, where you were emceeing the program. You were new to school then, and your voice captivated the audience which earned you a huge respect. You spoke with elegance, accuracy, and melody which many people yearn to earn.

Thank you Anura, for being a humane human being! 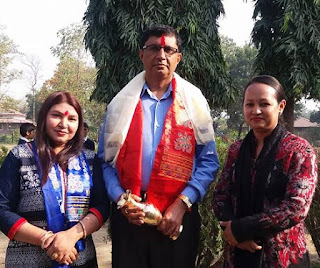 Later, when my daughter was promoted to your class, you became her best teacher per se. She would always talk about you, the way you spoke, the way you taught and the way you laughed. When Apekshya was born, she started counting days when 'the little girl' would come to school. I never knew you had that charismatic effect on my daughter. Even today, she cherishes the moments she enjoyed with you.

Thank you Anura, for making the permanent dent in my daughter's heart!

Your way of teaching and mentoring slowly became known in school. A lot of teachers appreciated your style of teaching, though very few ever tried to imitate it. When you became grade teacher of grade II, the grade became the best grade in pre-primary after Nursery. Happy smiles of students reappeared in grade II. None of the students wanted to miss your class. You had one-to-one connections with students. You cared about each of them, earning a lot of respect and love from all of them.

Thank you Anura, for being so affectionate mentor!

I know you never wasted a single minute of your work time in gossip. Gossipers have innate characteristics to pull people toward themselves. But, you were never deterred by them. In tiffin time I saw you in your desk correcting assignment of students. In your off hour, i.e. 7th period, I saw you in student's desk with slow learners, helping them to achieve their goals. Of course, you had deserving co-teacher Mr. Saniram Chaudhary(I've planned to pen about him too) by your side.

Thank you Anura, for showing exemplary dedication to your work!

When I became principal of the school, you were 'President' of school unit of 'Teacher's Welfare Union'. And as 'the President', I never found you coming to my office with bargains and complains. Of course, we had problems in the school, and you were always concerned with the solutions. You didn't bring the problems but solutions. Your philosophy of unionism was exemplary and beyond the imagination of many of the colleagues. I remain thankful to you for your matured leadership as a union president.

Thank you Anura, for 'thinking and working only for the welfare of organization' even as union president.

As principal, I did not have to worry about anything in primary section when you were working as 'Pre-Primary Coordinator'. You had regular meetings, discussed the problems, and came out with solutions and plans. Even more, you not only solved the problems of your section but also managed so many disciplinary issues in senior section too. There were many incidents I even didn't know, and when I knew, I found you'd already solved them. You took the responsibility without being instructed and did your work effectively. You were worried 'not to bother me' for the issues which may look trivial but were immensely dangerous.

We often talked about books, reading habits, the impact of social media on students and many other topics of importance. Your inputs were always valuable - be it on student welfare or on social life. You were a friend with whom I could talk even about my family and you did the same. This can be done only between close friends. I very badly miss your company now, but haven't lost hope to be in your company.

Thank you Anura, for being a very good friend and residing in my heart.

Thank you for being 'What you are !'

Posted by Kumud Adhikari at 4:39 AM